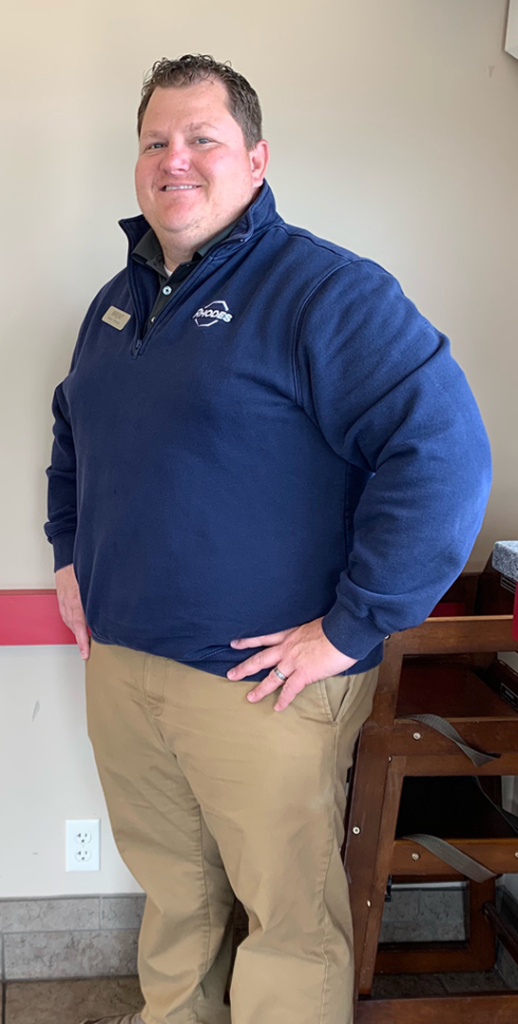 Hi, I’m Brent Bohnert, a District Manager over eight Rhodes locations.  Have you ever heard of a person leaving a 16-year career with a global company to enjoy a better “company culture?”  Just so we’re on the same page, “culture” isn’t something you can touch, hold or deposit into a bank account.  It’s something you feel in your gut and your heart that tells you that you’re in the right place with the right people.  It sounds a little crazy, right?

Well, call me crazy because that’s exactly what I did in March 2019.  I left my career at Sam’s Club and Walmart because my life was managed by the demands of running their businesses.  I sacrificed a significant amount of family time over those years and really wanted to turn that around.  So, I joined Rhodes.  Until now, I had no idea how many life experiences I was missing because of my job.

My transition started with a random phone call from Rhodes District Manager Sarah Shelton.  She called when I was ten hours into a shift with no end in sight.  Over several months, Sarah and I had multiple conversations about PAJCO (the company that owns Rhodes, Imo’s Pizza locations and Rally’s Drive-Ins), its culture, plans for growth and career opportunities.  It took me months to get the nerve to leave my 16-year career but doing so has given me a work-life balance and opportunities for personal and professional growth.

I was a loyal Rhodes customer before joining the company.  As I commuted to various stores in my previous career, I found Rhodes to be consistent in having what I needed to purchase.  I was always pushing the clock, so I trusted that Rhodes would get me in and out quickly, which was very important to me.  Since being hired, I’ve realized what you see in Rhodes’ stores is a very small part of their story.

Joining the Rhodes family has changed my life.  Rhodes genuinely understands that its people need work-life balance.  It has a people-centered culture.  I have never had as much family time as I do now.  I am proud to be part of a company that focuses on its culture and in every decision it makes.

People often ask me what I like about my new job at Rhodes.  I often reply, “the people.”  Our goal at Rhodes is to surround ourselves with awesome people that really get what we do, and they want to be part of a growing team.  The focus that we have on our people is genuine.  It’s unlike anything I’ve been part of before.

I’ve always had the mindset that we have to constantly sacrifice ourselves for the benefit of the business.  It’s all I ever knew before coming to Rhodes.  It’s so refreshing to know that we can be productive at Rhodes and still be able to have something left to give our families.

I’d like to invite anyone looking for a career change to consider joining Rhodes.  You’ll be joining a company that holds true to several core values including the one that resonates with me the most, “Do what we say we will do every time.”  This core value speaks of the trust and relationship building that we focus on day in and day out.  If you get hired, remember this piece of advice.  You will get as much out of this company as you put in.  Invest yourself in the culture and commit to it.

Visit www.Rhodes101.com to learn more about career opportunities at Rhodes and to submit an application.  Rhodes offers numerous reasons to join its team including:

Rhodes offers numerous reasons to join its team including:
Opportunity for career growth
Flex scheduling
50% off fresh food and free fountain drinks during shifts
30% off fresh food anytime including Imo’s Pizza and Rally’s Drive-In
Benefits and paid vacation time
Competitive pay
A people-centered culture and commitment to core values which are:
R – Respect and trust our team and guests
H – Honesty to self and others
O – Outstanding Experience for every guest and team member
D – Do what we say we will do every time
E – Empower all well-trained team members
S – Service + Execution = 101 Success