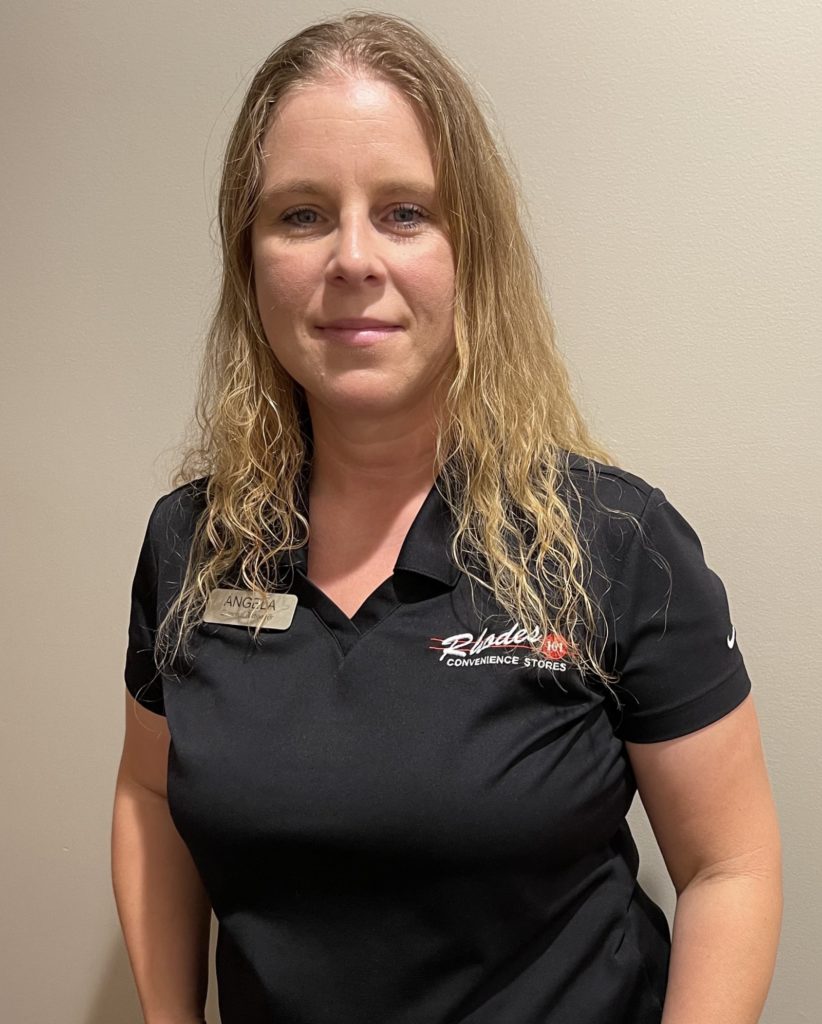 I don’t remember giving much thought to joining Rhodes.  I was a teenager with a seven-month-old baby, and Rhodes was close to my home.  Here I am twenty-one years later.

Hi, I’m Angela Woodworth, General Manager of the Sikeston Rhodes on North Main Street.  I got my first job when I was only fifteen and a half years old at a Chinese restaurant.  I worked as a waitress, cashier, table busser, dish washer and even crab rangoon maker.  I learned that in a job you must be willing to do anything and everything.  Having that knowledge at such an early age prepared me for all the jobs I’ve held since joining PAJCO (the company that owns Rhodes, Imo’s Pizza restaurants and Rally’s Drive-Ins).  My Rhodes career path has included cashier, deli worker, team supervisor, operations manager, deli manager and now general manager.

Like I said earlier, I didn’t give much thought to why I should join Rhodes so many years ago.  I was young and needed a job.  I have given more thought about why I should stay with the company this long.  One reason is the flexibility I’m given to make decisions for my store.  No one micromanages me at Rhodes.  The other reason is if I ever really needed something or help with anything, I can call the owners or Brent Anderson, Vice President of Operations, for assistance.  I believe they would do whatever they could to help me.

After twenty-one years, I’ve set and achieved many goals for myself and my store.  The next position that I could achieve would be a District Manager.  That type of position involves more driving and traveling between stores that are spread out among several towns.  I’d rather not commit to spending my time that way, but I would consider a bookkeeping or invoicing job in Rhodes’ Cape Girardeau office.  I actually enjoy paperwork and the attention to detail that it requires.

Until the next opportunity becomes available, I’ll continue enjoying my teammates and guests who I encounter through my store.  That includes Angie Deprow.  Angie manages the Rhodes in Scott City.  I appreciate how Angie is always consistent with who she is.  I also enjoy working with Brent Anderson.  He always takes time to listen to what I have to say.  There are plenty of people in between including Kim Beardslee, Janet Murphy, Rachael Rysdam, Diane Cobb, Amy Butler, Jessica Long and Sarah Martin who I have had the pleasure of working with.

In regards to my favorite guests, I have so many to list.  They include Caroline, Charlie, Clarence, Donna, Jim Bob, Jane Ann, Ada, Rosemary, James, Marvin and Vernie.  All of them keep my days interesting.  I’m grateful that Rhodes has become a place that they, and so many other people, want to visit.

I would encourage anyone who is a multi-tasker and isn’t afraid to do any task that’s asked of them to apply for a position at Rhodes.  If you get hired, my advice would be to listen, pay attention, focus on what needs to be done and be on time.  Most importantly, embrace the chaos that comes with our busy atmosphere.  At Rhodes, you can count on us to honor all six of our core values including “Do what we say we will do every time.”  Rhodes has kept its word to me for twenty-one years, and I’ve kept mine to them.