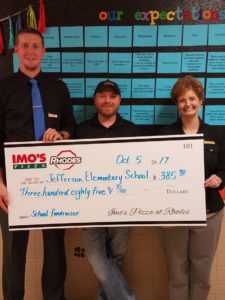 Ryan Austin (middle) of Imo’s Pizza presented a $385.70 check to Zach Payne and Dr. Rene Alpers of Jefferson Elementary School in Cape Girardeau.  The money was raised through a fundraising day hosted Friday, September 22.  Ten percent of all food and gift card purchases made that day went to the school.

The donation equaled 10% of Imo’s Pizza purchases made September 22 at Imo’s Pizza located at 1201 Broadway, including gift cards. The school’s earning potential was not limited to only a few hours of operation or just customers that mentioned the school upon ordering. Rather, Imo’s Pizza at Rhodes allowed the school to benefit from all purchases made that day. Imo’s Pizza helped Jefferson Elementary School publicize the fundraiser by providing fliers and to share with students’ families and Facebook posts to reach its social media followers.